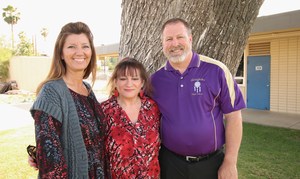 It seems that each year around graduation, we as a community are reminded of the continued perseverance of our students. We hear of students beating the odds and being the first in their families to go to college; students who worked their whole life to be accepted to the college of their dreams; students who put in endless amount of studying time to receive a high score on their Armed Services Vocational Aptitude Battery (ASVAB), and students who decide to come back to school to receive their high school diploma.

Nancy Ferraz first enrolled in the California School for the Deaf in Riverside back in 1958. Due to a difficult home life, she made a choice to leave school with her future husband in 1966, one year away from graduating high school. They began their life together, got married and started a family. She then began working for the government, but after the terrorist attacks on September 11th, the government became more restrictive on employee qualifications. When her supervisors learned she had not graduated from high school, they gave her one year to complete her GED. Unfortunately, that year her husband passed away and was unable to complete her GED.

Fast forward to 2013, Nancy had found another job, but never felt right about her decision to leave high school without a diploma. She decided to re-enroll in school to receive her GED as a matter of principle. In addition, she wanted to improve her ability to use English, since her first language is American Sign Language (ASL). Thanks to the help of one of her counselors at the Department of Rehabilitation in Temecula, Julie Droutsas, Nancy enrolled in the Hemet Adult School. Now, four years later, she will be joining the other Class of 2017 graduates as they walk across the stage to receive their diplomas.

Nancy said this dream would not have come true if it wasn’t for the support system she had. She thanked Julie Droutsas for not only helping her enroll, but supporting her the entire four years. She thanked Hemet Unified for assigning ASL interpreters Pamela Atkinson and Carrie Ann Jorgensen to interpret for her during classes and thanked Atkinson and Jorgensen for the constant encouragement. She said she gives a lot of the credit to teachers Ken Luber and Ben Adams, saying, “They were the most instrumental in developing my ability to write and comprehend the English reading criteria.” She thanked Claude Stemp for helping her achieve a high math score and thanked Principal Tara O’Malley for checking to make sure she was supported in her educational journey, and for encouraging her every step of the way. “My gratefulness to all of these people is insurmountable. I broke into tears when I found out that I had finally passed and was able to get my diploma. They cried along with me.”

Nancy said she advises all students who have dropped out of school to go back. She admits that going back was a challenge, but not as hard as trying to find a career without an education.

Congratulations to Nancy Ferraz on your accomplishment and for having the courage to return to school to receive your high school diploma!